This is the story of three young men poised to take on the world. They grew up together in the heart of the lush Willamette Valley, playing in orchards and working summer jobs in the fields around their Corvallis homes, then spent their college years fermenting all manner of alcoholic beverages, never dreaming that they were setting themselves up to start one of the country’s fastest growing craft cider companies, 2 Towns Cider. 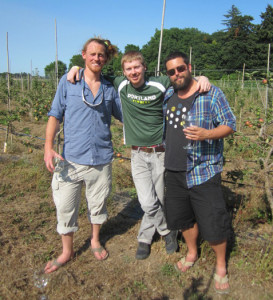 Their adventure began in 2009 with Aaron Sarnoff-Wood’s notion that it would be fun to start a brewery. He was living in Eugene, one of the two towns of 2 Towns, looking to make a change after losing his job to the moribund economy. Old friend Lee Larsen liked the idea, but quickly concluded that they didn’t quite have the financial resources for a brewery, not to mention that the Pacific Northwest has no shortage of good craft beers.

Lee’s older brother got married that same year, and when the cider they made for the reception was a big hit the seed of an idea was planted. At Lee’s wedding the next year the team reprised their cider along side their home brew and wine. The 3 kegs of cider were gone in 20 minutes, and a new company was born on the spot. They filed for a license in 2010 and were soon joined in their budding enterprise by childhood friend David Takush, releasing their first two ciders in 2011. Money was tight, but with their combined savings and the help of family and friends, they leased a 1000 square foot garage space at the edge of Corvallis and bought enough equipment to keep them going for two years. Completely underestimating the popularity of their ciders they were at capacity in two months. Two years later they moved to a 10,000 square foot space, including a 14 handle tap room, adding a needed second 15,000 square foot production facility that same year. 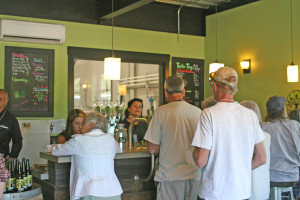 Some of this impressive growth can certainly be attributed to having started a cider company just as cider was beginning its meteoric rise in the American marketplace, but 68 new companies started production in 2010/2011 and few have seen this level of success. The trio credits the role that being in a region that is accepting of experimentation and a willingness to try new things has contributed to their progress, and though this has undoubtedly been a factor it is likely that other things are at play.

Like a great cider, each of these young men brings something to the mix that gives life and balance to the whole. Aaron is the artist with a background in graphic design that comes into play in their memorable branding. Lee’s degree in finance brings critical business skills. David has a masters in Fermentation Science where he focused on the aroma and flavor compounds in fermented fruit juices and the characteristics of various yeast strains. What’s more each brings deep roots in the community that may give them a distinct edge whether through family (Aaron’s father is an agronomist, Lee’s currently owns a local winery) or connections at OSU’s Food Sciences Department. Old friendships come into play as well. The farm where Dave spent summers moving irrigation pipe, owned by one of his grade school friends, now grows rhubarb under contract for the company’s two rhubarb-containing ciders, for example. 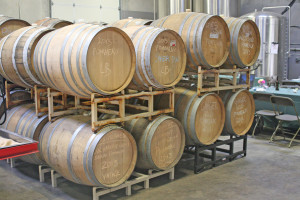 The ciders themselves are influenced by traditional European styles and yet are thoroughly American. Lee lived in Barcelona for several years as a teenager and developed a love for Spanish high acid Basque ciders (Aaron visited on a number of occasions), and this shows in the bright crispness of the 2 Towns line. Yet these are far from acid bombs, each delivering a flavor profile that balances tart and fruit. The trio has also embraced a craft brewery spirit from their playful and clever naming (berry ciders called Throne of Thorns and Made Marion, rhubarb-enhanced Rhubarbarian, Cherried Away cherry cider) to their willingness to experiment. The company bulletin board has a space where employees can suggest new flavor combinations for trial in the tap room, and some, such as Cot in the Act (apricots) and Cidre Muscato (orangey muscat grapes) have made it into the permanent line up. But for all of their experimentation, they never lose sight of the fact that they are making cider, an apple-based drink, so some apple character is always present in their easy-drinking session-able ciders. As the cider market matures, and consumer palates with it, they will be ready with their Traditions Ciderworks line, vintage dated fine ciders made in small batches from designated orchards. Afton Field, made with American heritage apple varieties sourced from friend Tyler Jones’ Afton Field Farm (and the site of Lee’s 2010 wedding), is aged in old pinot noir barrels and bottle conditioned using wild Brettanomyces yeasts. It is bone dry and intensely sparkling, brisk with acid and underlying fruit. The award-winning Riverwood is made with Jonagold apples harvested from the Riverwood Orchard in Monmouth, OR (owned by the father of another school friend). The Willamette Valley’s cool summer nights allow the flavors in the fruit to develop slowly, the way they would in a pinot noir grape. The cider is also lively and sparkling, a little less dry than the Afton Filed, and rich with the floral flavors of tropical fruit. 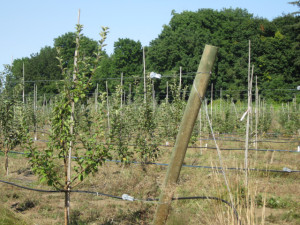 The single orchard ciders of the Traditions line highlight the 2 Towns commitment to supporting local agriculture. Although the juice for the line of session ciders comes from Hood River, OR and the Yakima Valley in Washington, all the other fruits and honey originate within 100 miles of Corvallis. They’ve put in their own small orchard of high-tannin cider fruit for the fine ciders, which will produce enough to press for the first time in fall 2015, but will certainly need more as the business continues to expand. High quality cider fruit is in short supply, so taking a cue from the wine industry, 2 Towns recently announced they had entered into 10 year contracts with 5 growers within 40 miles of Corvallis for the exclusive harvest of 40 acres of apples. This will certainly benefit not only 2 Towns but the cider industry as a whole for it will encourage other growers to invest in fruit for the cider market.

It isn’t news that sales of cider have soared in the US in recent years with much of the volume coming from the big industry players such as Boston Brewing’s Angry Orchard and AB InBev’s Stella Cidre. This makes all the more remarkable that 2 Towns’ sales were up 159% in 2014, putting them number 16 in the top 20 cider brands in the country. They managed this while still having distribution largely confined to the Pacific Northwest. As 2 Towns expands into California and the midwest their future looks to be as bright as their ciders.